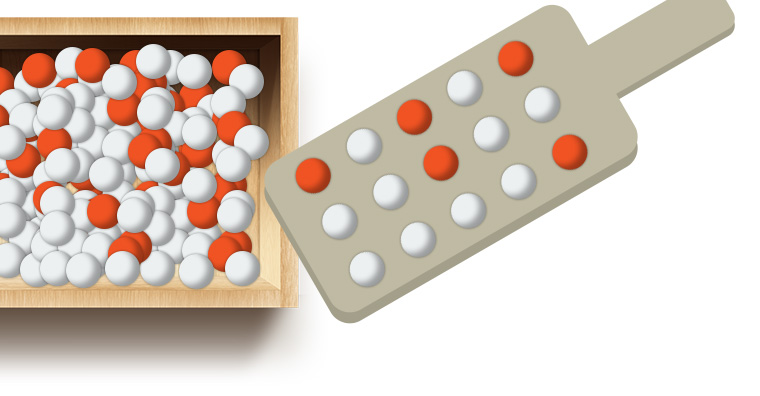 This month, TERRI ERICKSON and RICK BERNETT facilitated THE RED BEAD EXPERIMENT – a simulation created by Edwards Deming.  Terri and Rick created a virtual version of the experiment using Excel, which they were able to share with us.

The Red Bead experiment is a simulation that illustrates multiple points about poor management practices.   In Deming’s experiment, “workers” would dip a paddle (with several divets) into a box of red and white beads.  When the paddle was removed from the box, the beads would be counted.  Red beads equated to defects and white beads equated to product delivery.  The beads were recorded for each “worker”; the fewer red beads a worker had, they were considered to have higher performance.  After a few rounds of dipping their paddles, the results of each worker were reviewed.  Those with the lowest performance were fired.

Using the Excel workbook, the workers took turns ‘dipping their paddles’ and recording the results.  No one provided a paddle with all white beads.  Results were recorded accordingly.

After a couple rounds of game play, the CEO decided to spend money on our manager  to help her become a better leader and thus help us (the workers) produce a higher quality product.   Workers continued to ‘dip their paddles’ for a another work week and they were still producing defects (red beads).  After the third week, the CEO determined that perhaps we should participate in a personality test, such as the Meyers Briggs personality test.  That should definitely help our numbers improve.

Unfortunately, after week four, our numbers did not improve.  Our performance metrics were reviewed and workers with the lowest performance were fired.   Those who still had their jobs continued to ‘dip their paddles’.  The paddles continued to have defects (red beads).  After two more rounds, the CEO decided that we couldn’t continue anymore.  We needed to end the project.

What happened?  We debriefed on the game play and reviewed the Operations Law of Variation.   Terri and Rick also shared 7 lessons that can be gleaned from this experiment including:  most variation comes from the process, not the workers; if you don’t like the results, improve the “System of Production”; and ranking personnel does not serve a purpose.  Demings said it best, “Every system is perfectly designed to get the results it gets”.

More information on The Red Bead Experiment, including a YouTube video of a live simulation, can be found here:  https://deming.org/deming-red-bead-experiment/