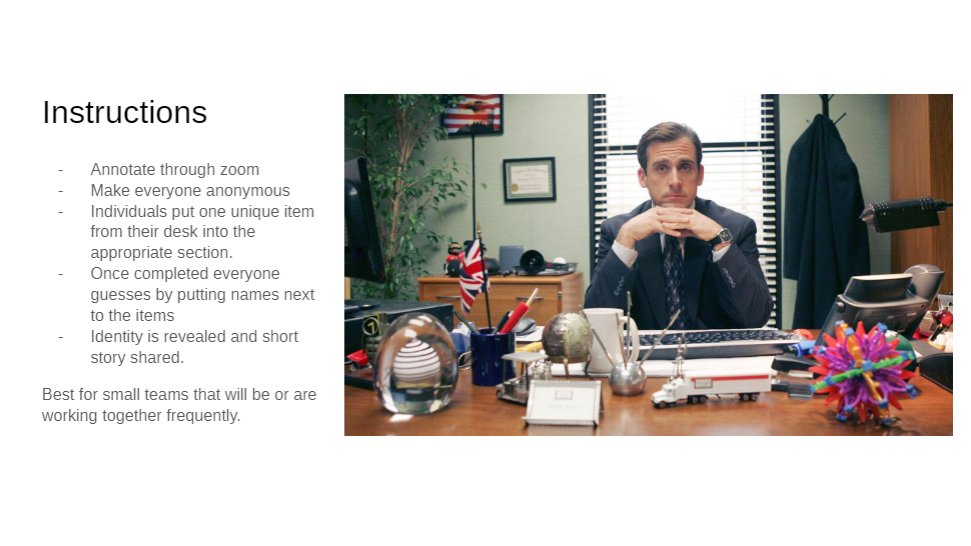 Big thanks to David for introducing us to a few different games and activities that can be used for ice breakers with teams or other group sessions. These games are quick – most under five minutes – and intended to get everyone laughing and relaxed before getting down to business. Be sure to check out the deck that David used as a jumping off point (available in PowerPoint or Google Slides).

The first game was “Whose Desk Is It Anyway?”. Each participant anonymously submits an item from their desk and the rest of the group has to guess the owner of the object. Super quick and a good way for people to put the focus on an item instead of talking about themselves.

Next up was “This or That?”, where the group voted for their favorite of two choices. Comparisons can be light (waffles vs pancakes), topical for the group (video games vs board games), or whatever might fit the situation.

The group then went on a “Scavenger Hunt”. We were split into two teams and your team earned a point when a team member found the item before the other team. This is very scalable in difficulty from everyday items people are likely to have close at-hand or more obscure items that show who’s playing the game to win.

Last up was “Guess the Picture”. David had hidden several pictures under a grid of boxes. He slowly removed one box at a time while the group tried to guess what was being revealed. This is another opportunity to pick a topical picture or make it as easy or hard as you’d like.